The IBF, WBA and WBO heavyweight champion, Anthony Joshua has a few choice word for critics of the protest speech he delivered on Satueday:  “If you think I’m a racist, go f*** yourself. ” 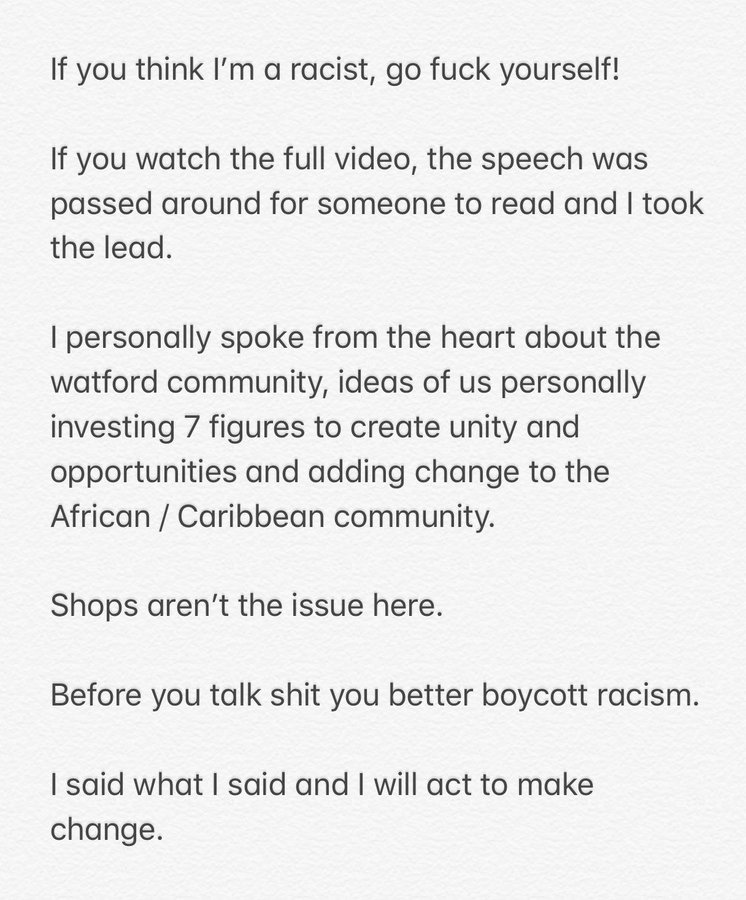 The 30-year-old Nigerian-Brirish boxer has been criticized by some after he read a speech written by a friend of his who was unable to attend the Black Lives Matter protest rally.

He was labelled ‘racist’ by some online critics, who mostly pointed out one line in the speech which states: “Abstain from spending your money in their shops and economies, and invest in black-owned businesses.”

In response, Joshua posted his response on his twitter page and added a video of the now controversial speech.

He said: “If you watch the full video, the speech was passed around for someone to read and I took the lead.

“I personally spoke from the heart about the Watford community, ideas of us personally investing seven figures to create unity and opportunities and adding change to the African/Caribbean community.”

In the speech, Joshua told the Watford about peaceful protests and that he would no longer be passive about social justice issues.

Joshua said: “We can no longer sit back and remain silent on these senseless, unlawful killings and sly racism on another human being – based on what? Only their skin colour.

“We need to speak out in peaceful demonstrations – just like today, so well done Watford.

“We must not use a demonstration for selfish motives and turn it into rioting and looting.”

The boxer has a contract to defend his world titles against Kubrat Pulev at the Tottenham Hotspur Stadium in London on 20 June. However,  fight has been cancelled due to the Coronavirus Pandemic.

City Voice is a newspaper dedicated to the highest ideals of journalism. Our content, which is focused on giving voice to the many groups and interests – business, political and cultural – that populate the mega city, is produced by a corps of experienced and highly motivated professionals. Our content is served online, mobile, in print and on social media channels.
Contact us: cityvoiceng@yahoo.com

©
Do NOT follow this link or you will be banned from the site!